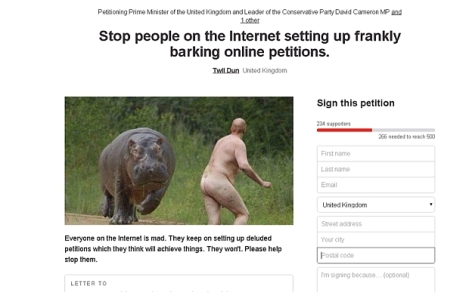 Yes, By All Means Let’s Put a Stop to Internet Petitions!

Let me begin by saying that, in Britain, “barking” is short for “barking mad.” There are thousands of petitions on the Internet. Even the ones that are well intentioned could have repercussions far different from your goals in signing them.

For one thing, the creator of the petition has your name and e-mail address to sell to whatever nefarious operators are in the spamming business. If you absolutely must sign an Internet petition, give them a throwaway e-mail address that you don’t care to check on a regular basis. Don’t expect your signature to have any effect at all.

Online petitions are in the news today because of the San Jose judge who sentenced a rapist to only six months in prison, with time off for good behavior. Some one million Internet users have signed petitions to remove Judge Aaron Persky. It’s a waste of time, unfortunately, because that’s not how one influences a judge.

Even more interesting—and much more effective in my opinion—was a protest by ten members of the San Jose jury pool who refuse to serve on any case in which Judge Persky is involved. That could be devastating to a jurist and force him to resign.

Clicktivism, also referred to as slacktivism, is the lazy man’s way to try to effect social change.

In the meantime, I suggest you send a tub of lubricant preferably mixed with gravel to Brock Turner’s cellmate. That’ll work, too.