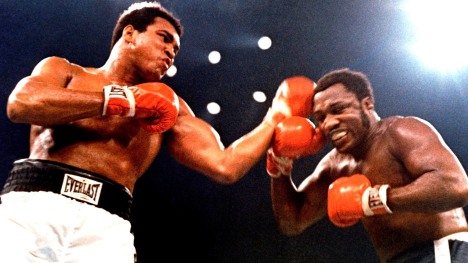 Martine and I reacted to the heat by going to the air-conditioned Paley Center for Media. While Martine watched 1950s sitcoms, I saw Muhammad Ali’s three bouts with Smokin’ Joe Frazier over a three-hour period:

It was a grueling experience to see three fights between the same competitors one after the other, all with commentary by the grating Howard Cosell. At least, the Paley’s John H. Mitchell theater was well air conditioned, and the alternative would be to endure an altogether different sort of hell.

It was interesting to see Ali improve between the fights, starting from his clay-footed rope-seeking fighting style in the 1971 bout. Frazier stayed the same—always aggressive, bobbing, weaving, and left-hooking—but Ali developed new ways of meeting his challenge. Between the two of them, I was impressed by Frazier for his indomitable courage, and Ali for his intelligence and ability to adapt to different circumstances.