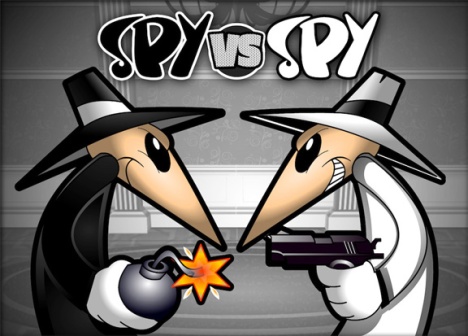 The Spy Vs. Spy Characters from Mad Magazine

Looking back, the Communists were a worthy enemy. There were no suicide vests or improvised explosive devices aimed at innocent civilians. (Religious wars are always the most brutal.) Mind you, the Russians weren’t Boy Scouts, either. But after the ugliness and indiscriminate savagery of the current Sunni Muslim jihad against the West, I grow downright nostalgic about the 1960s.

Lately, I have been reading the three great spy novelists of that time—with great pleasure. I just finished Funeral in Berlin by one of them, the great Len Deighton. The other two were Ian Fleming of James Bond fame, and John Le Carré, author of Tinker, Tailor, Soldier, Spy and The Spy Who Came In from the Cold.

Funeral in Berlin is typical of the period. The hero, who is called Harry Palmer in the movies but is unnamed in the books, arranges to transfer a Russian scientist to West Berlin by means of a coffin. No one seems to be trustworthy. In fact, the character one would think would be the most villainous, Colonel Stok of the KGB, is actually the most sympathetic character that “Harry” encounters. The people who are supposedly his allies are an untrustworthy lot: two of them try to kill him, others just want to sell him down river.

In comparison, James Bond is almost never surprised by villains who are supposed to be on the same side as him. There are all those lovely girls, and Felix Leiter of the CIA appears as a supporting hero in several of the novels.

Only Le Carré comes close to Deighton in creating a murky world of spies and supposed friends. My favorite of his books is Tinker, Tailor, Soldier, Spy, which has been made into an excellent film and a great British TV series starring Sir Alez Guinness as George Smiley.