The Crowning With Thorns at Buenos Aires’s Tierra Santa

This country is so Protestant, so Evangelical, that it is positively refreshing to visit a Biblical theme park that is oriented toward Catholicism. The Tierra Santa Theme Park in Buenos Aires does not get many American or European tourists. Its website is in Spanish only.

The park is set along the south bank of the River Plate, just west of the Aeroparque Jorge Newberry. You can see animatronic figures of the Creation, of the Last Supper, and other events from the life of Christ. There are a few references to the Old Testament, but not many. If you get hungry, you can dine on pita bread with hummus and other foods that are reminiscent of the time and place. 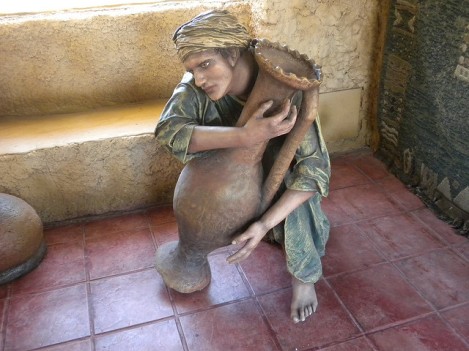 The Wedding at Cana: “There is no more wine.”

It’s probably better to go there via taxi, but both times I went, I took the Belgrano Train Line to the Estación Scalabrini Ortiz, only a few minutes from the Retiro railroad terminal. It involves taking a nice walk along the River Plate and looking across the muddy waters at Uruguay. There is generally a cool breeze along the river, which makes the 20-minute walk from the station bearable.

Frankly, one of the things I like about South America is that it is unabashedly Catholic. To be sure, the Evangelicals are making inroads; but I can more easily ignore them than I can in the United States. My pictures of Latin America include a lot of churches, because I visit a lot of churches. They look like churches. In Los Angeles, the Cathedral of Our Lady of the Angels looks more like a warehouse than a church. It was built by former Cardinal Roger Mahony: Therefore, it is often referred to as the Taj Mahony.