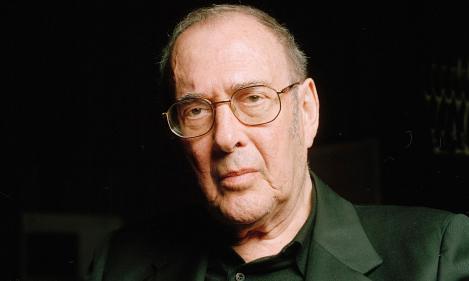 Harold Pinter in a Photo by Eamonn McCann

It was during the Presidency of George W. Bush, who at the time was putting together the so-called “Coalition of the Willing” to combat the evil Saddam Hussein. Playwright and poet Harold Pinter had given a speech at a “No War on Iraq” Liaison meeting in Parliament. He ended his speech indicating that we all add “a clear obligation, which is to resist.” The following two poems were written by Pinter with that spirit in mind:

Here they go again,
The Yanks in their armoured parade
Chanting their ballads of joy
As they gallop across the big world
Praising America’s God.

The gutters are clogged with the dead
The ones who couldn’t join in
The others refusing to sing
The ones who are losing their voice
The ones who’ve forgotten the tune.

The riders have whips which cut.
Your head rolls onto the sand
Your head is a pool in he dirt
Your head is a stain in the dust
Your eyes have gone out and your nose
Sniffs only the pong of the dead
And all the dead air is alive
With the smell of America’s God.

There’s no escape.
The big pricks are out.
They’ll fuck everything in sight.
Watch your back.

It’s always interesting to see oneself as the villain of the piece. But then, of course, we put ourselves all too willingly in that role. It didn’t take long before the “Coalition of the Willing” was down to us all by our lonesomes.

Is This What the Pentagon Really Wants?

I love listening to the Republican Presidential Candidates for 2016 talk about foreign policy. All agree that Barack Obama is a “pussy” and that what we need is to destroy ISIS. But do they want to send in our troops and open new Green Zones in Syria and Northern Iraq? Urm, well, not really. Although Ahmed Chalabi is no longer around to say that we would be greeted with candy and flowers, I am sure that there are some Pentagon planners who would love to see an expansion of their powers, despite the cost.

Can the United States effectively wage war in an area where it doesn’t know the language, the culture, or the players involved? I myself think that all our direct efforts would be foredoomed to failure. Perhaps we can seal off parts of the country and reserve them for tennis courts, driving ranges, and chain burger restaurants for our boys and girls in uniform. But haven’t we already done that? And with what results?

As much as we love seeing ourselves as the mighty victors of World War Two, we’ve done precious little to add to our reputation since then. But, heaven knows, we keep on trying, piling up failure upon spectacular failure. The only thing our politicians can hope for is that the voters have a short memory and an even shorter fuse.

In the end, what we are doing in the Middle East right now is probably the right thing. ISIS will eventually collapse on its own. Isn’t it really quite stupid to build a caliphate on a bunch of foreign mercenaries, some of them not even Muslim, recruited through social media?

The following post was written on Yahoo360 back in March 2006. Even with the U.S. forces having been withdrawn, the basic situation has not changed much:

Looking beyond the daily news, the explosions, the body bags, and the turmoil in both Baghdad and Washington, what is likely to happen to Iraq in the years to come? I think that Iraq’s future is closely tied to Iraq’s recent past, starting when it was part of the Ottoman Empire until the end of World War I. As Constantinople had made the wrong choice of allies in the war—namely Germany and Austria—the British and French parlayed after the war to decide how the land would be divvied up.

Many of the Foreign Office clerks in London had only an Old Testament background in the history of the area. So they proceeded to create new countries based on maps printed in old Bibles and distant recollections of empires long faded into dust. There was also a debt that had to be paid: Hussein ibn Ali, Sharif of Mecca, had provided critical aid to the British in their war against the Turks (you may know him as Omar Sharif from the film version of Lawrence of Arabia), and the British promised to make his three sons kings. To accomplish this, they created three countries—Syria, Transjordan, and Iraq—for Hussein’s sons to rule. Syria was placed under French administration; and Transjordan and Iraq, under British.

The tale of how this happened is contained in a book that should be required reading for everyone interested in the subject: David Fromkin’s A Peace to End All Peace: The Fall of the Ottoman Empire and the Creation of the Modern Middle East, which is available from Amazon.Com. You may be interested to know that one of the prime movers behind this remapping of the Middle East was none other than the young Winston Churchill.

Iraq’s monarchy didn’t last very long, but its borders are more or less the same as stipulated by the Sykes-Picot Agreement of 1916 and several subsequent treaties. Ignored by the Foreign Office clerks was the fact that the Iraq they created was split along major cultural fault lines: (1) the north was Kurdish; (2) the area around Baghdad extending west to Jordan was largely classical Sunni Arab with an intermingling of Shi’ites; and (3) the South, centered around Basra, was almost exclusively Shi’ite.

Why don’t we just break Iraq into three countries? (1) The Turks would go ballistic if the Kurds had their own state and destabilized the Kurdish regions of Turkey; (2) There would be wholesale genocide between Sunnis and Shi’ites in the center; and (3) A Shi’ite state in the south would eventually fall under the sway of Iran, even though the Iranians speak a different language.

What can we do? I think we should declare our adventure in Iraq to be a stunning victory and bring our troops home. They have no role to play in a civil war except as targets in a shooting match between all parties concerned.

I wouldn’t change a word of what I wrote back then. I still think that Iraq will be subdivided into two or three states, one of which will be an independent Kurdistan. As for the Sunnis and the Shi’ites, only Allah knows what will happen.