The Martin Droeshout Portrait of Shakespeare for the First Folio

Today is the 457th birthday of William Shakespeare, the Bard of Avon. In my lifetime so far, I have read all the plays attributed to Shakespeare and about half of the poems. Many of the plays I have read multiple times, the leader being Hamlet. Currently, I am re-reading The Winter’s Tale, and, in the months to come, I hope to revisit several other of my favorite comedies, such as Measure for Measure, All’s Well That Ends Well, The Tempest, and Twelfth Night.

I know it would be better to see the plays performed. But even if Covid-19 were still not on the rampage, it’s not easy to see the Bard in performance. So I must reconcile myself to reading the plays.

All in all, he wrote some forty plays, most alone, but some in partnership with other playwrights. No, I do not think that Francis Bacon wrote his plays, nor the Earl of Southampton, nor Wile E. Coyote. I suppose I could live my life in an alternate universe like Donald Trump’s supporters, but I much prefer the real world. Consequently, I am not interested in doubting his authorship. After all, we probably know more about the Bard than we know about any of his contemporaries.

If you like Shakespeare as much as I do, I have a film to recommend: Jacques Rivette’s Paris nous appartient (Paris Belongs to Us) is about a group of young Parisians putting on a performance of Pericles, Prince of Tyre—not one of Shakespeare’s best plays, and one most likely not 100% written by him, but definitely fun for all Bardaholics.

I have just re-read William Shakespeare’s Hamlet in honor of the Bard’s 455th birthday. Although it has been several decades since my last approach to the play, I was surprised how familiar the language was. Apparently, over the years such expressions as “the dead vast and middle of the night” and “I am but mad north-north-west—when the wind is southerly I know a hawk from a handsaw” have become part of my speech and writing.

This time, however, a new thought struck: The play is not just about Hamlet’s dilatoriness in revenging the death of his father by his uncle (who thereupon married his mother, the queen). It is also about the difficulty of straightforward revenge. And that despite the fact that revenge plays were a popular genre. Even Shakespeare, early in his career, came out with Titus Andronicus (ca 1590), in which there is rape, murder, cannibalism, and oodles of blood. Then, in 1606 came Thomas Middleton’s The Revenger’s Tragedy.

In Hamlet, however, Shakespeare shows that the road to revenge can be rocky. The last scene in Act V begins with the Prince telling his friend Horatio:

Sir, in my heart there was a kind of fighting
That would not let me sleep. Methought I lay
Worse than the mutinies in the bilboes. Rashly,
And prais’d be rashness for it,—let us know,
Our indiscretion sometime serves us well,
When our deep plots do pall; and that should teach us
There’s a divinity that shapes our ends,
Rough-hew them how we will. 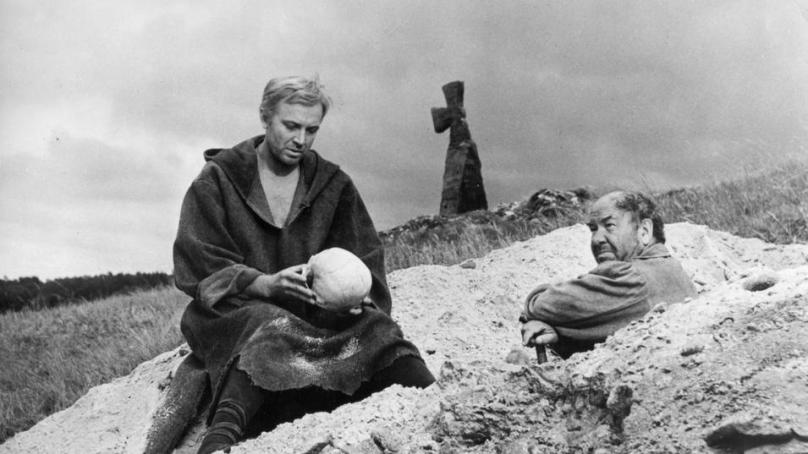 This realization on Hamlet’s part after his many hesitations earlier on shows that he has learned a lesson from all his agonizing:

HORATIO.
If your mind dislike anything, obey it. I will forestall their repair hither, and say you are not fit.

HAMLET.
Not a whit, we defy augury. There’s a special providence in the fall of a sparrow. If it be now, ’tis not to come; if it be not to come, it will be now; if it be not now, yet it will come. The readiness is all. Since no man has aught of what he leaves, what is’t to leave betimes?

I wonder how many discoveries await me on re-reading Shakespeare’s plays. I think perhaps it’s worth the effort to make the effort. 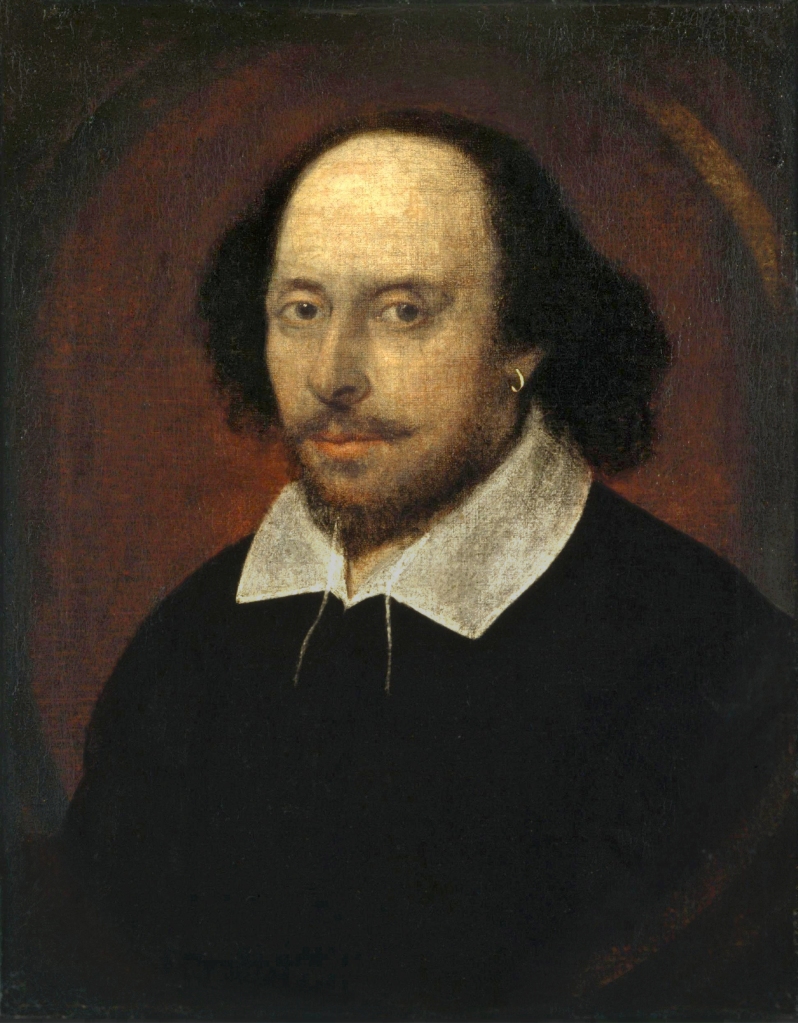 Today is the 455th anniversary of the birth of dramatist William Shakespeare. To honor his birthday, I picked up my old Penguin edition of Hamlet and started to re-read it for the nth time. It has been a couple of decades since my last reading. I was shocked to the extent that the Bard’s language had become so familiar to me that I almost regarded it as my own. From Act I alone, I had adopted into my own language such expressions as:

Before my God, I might not this believe
Without the sensible and true avouch
Of mine own eyes. (I,i,56-58)

Something is rotten in the state of Denmark. (I,iv,90)

There are more things in heaven and earth, Horatio,
Than are dreamt of in your philosophy. (I,v,166-167)

If these short quotes are familiar to you, it is because they have become a part of our language. Shakespeare actually changed the way we think about things. Within the next day or so, I want to write about how Hamlet changed forever the straightforward revenge tragedy that was such a part of Elizabethan and Jacobean dramaturgy.

The Famous Droeshout Portrait of the Bard

My own ABCs consist of places I have loved (Iceland, Patagonia, Quebec, Scotland), things I feared (Earthquakes), writers I have admired (Chesterton, Balzac, Proust, and Borges); locales associated with my past life (Cleveland, Dartmouth College, and UCLA), people who have influenced me (John F. Kennedy), foods I love (Olives and Tea), and things I love to do (Automobiles and Books). This blog entry is my own humble attempt to imitate a writer whom I have read on and off for thirty years without having sated my curiosity. Consequently, over the weeks to come (there are only three letters left in the alphabet: X, Y, and Z), you will see a number of postings under the heading “Tarnmoor’s ABCs” that will attempt to do for my life what Milosz accomplished for his. To see my other entries under this category, hit the tag below marked “ABCs”. Today is W for William Shakespeare.

On one hand, it is pretty easy to make fun of the Immortal Bard. The following is from Jonathan Miller’s On Further Reflection: 60 Years of Writing:

Take this my hand, and you fair Essex this
And with this bond we’ll cry anon
And shout Jack Cock o’London to the foe.

Or: “Is it botched up then, Master Puke?” Or: “Now is steel ’twixt gut and bladder interposed.”

If one is not in the habit of reading difficult or old works, tackling Shakespeare can be a chore. His rich, even overripe, use of language goes against everything we have been taught about written communication. And yet, and yet, there are many complex thoughts and emotions that have never been better expressed before or since.

Over the last six months, I have been reading the “tetralogy” of Henry VI Parts 1, 2, and 3, followed by Richard III. Not too many people venture to read Henry VI, but from them come some great thoughts, such as this from Part 2, scene 3:

What stronger breast-plate than a heart untainted!
Thrice is he arm’d, that hath his quarrel just;
And he but naked, though lock’d up in steel,
Whose conscience with injustice is corrupted.

And yet these are all in a minor key when you compare them to the four great tragedies—Hamlet, Macbeth, King Lear, and Othello—which will shake the world of whoever reads, hears, or sees the plays. Take this from the wretched Lear in Act IV:

Ay, every inch a king:
When I do stare, see how the subject quakes.
I pardon that man’s life. — What was thy cause? —
Adultery? —
Thou shalt not die: die for adultery! No:
The wren goes to’t, and the small gilded fly
Does lecher in my sight.
Let copulation thrive; for Gloster’s bastard son
Was kinder to his father than my daughters
Got ’tween the lawful sheets.
To’t, luxury, pell-mell! for I lack soldiers. —
Behold yond simpering dame,
Whose face between her forks presages snow;
That minces virtue, and does shake the head
To hear of pleasure’s name; —
The fitchew nor the soiled horse goes to’t
With a more riotous appetite
Down from the waist they are centaurs,
Though women all above.
But to the girdle do the gods inherit,
Beneath is all the fiend’s; there’s hell, there’s darkness,
There is the sulphurous pit; burning, scalding, stench, consumption! — fie, fie, fie! pah, pah! Give me an ounce of civet, good apothecary, to sweeten my imagination: there’s money for thee.

I will continue reading the history plays, and then I’ll tackle the tragedies and comedies again. Shakespeare just gets deeper as you continue reading. One is never done with him.