Heurtebise and Orpheus in the Underworld

In just three hours, Turner Classic Movies is going to show one of my favorite films: Jean Cocteau’s Orpheus (1950), starring Jean Marais, Maria Casares, François Périer, and Marie Déa. Cocteau took a Greek myth and adapted it to the French experience in the Second World War and came up with a majestic dreamlike work which not only works but sticks in the memory. (Also great is Cocteau’s Beauty and the Beast, which also takes a myth and somehow improves on it.)

Particularly memorable are the scenes in the underworld, where Orpheus (Marais) goes with Heurtebise (Périer) to bring his wife Eurydice (Déa) back. According to the myth—and the film—Orpheus is not supposed to ever look upon his wife again once she has been rescued from the world of the dead. That did not work, and before long Orpheus himself is shot and finds himself walking by the ruined barracks where Cocteau’s underworld is set. One new difference is that Death herself, played by the severe and beautiful Maria Casares has fallen in love with him. This was not part of the Greek myth, either, but it makes for a better story.

I do not remember how many times I have seen Orpheus. However many times it was, it was apparently not enough. 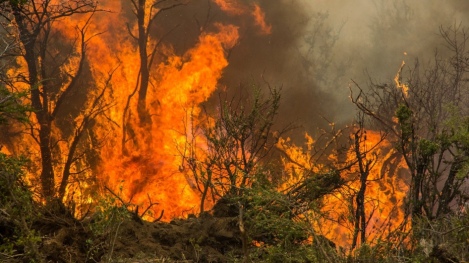 Wildfires in Argentina’s State of Chubut

Whenever one is traveling anywhere in the world, one must keep up with the news. When Martine and I went to Argentina in 2011, for example, there was a major Chilean volcanic eruption that spewed ash all over the State of Rio Negro, forcing us to remove San Carlos Bariloche from our itinerary and replace it with El Calafate. This time, there is a huge wildfire near Los Alerces National Park and the town of Cholila. While the eruption of the Puyahue/Cordón Caulle volcano in 2011 lasted for months, I am confident that the Chubut fires will be doused well before November, especially as there will be an intervening rainy season.

Among the Chubut locales I hope to visit are El Maitén, Esquel, and Trevelin.

The Area Around Cholila Before the Fire