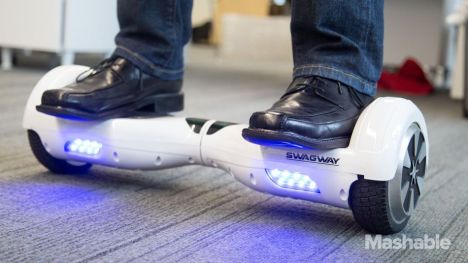 I have seen it coming over the years, the burgeoning diversification of wheeled transport for young people. When I first came to L.A. late in 1966, there was a concert film (which included the Rolling Stones) called The T.A.M.I. Show, which was filmed in 1964. It began with a prologue of a couple of young skateboarders rolling down a steep street in what looked like Pacific Palisades. I have even seen a few motorized skateboards recently that look clearly illegal, but their owners must think they are powerful chick magnets.

Of course, bicycles have been around since the 1800s, but now they are getting ever more popular, with occasional street closures called CicLAvia. (I remember getting stuck on Venice Boulevard in Mar Vista for over half hour during one of those.)

Next were inline skates, which infuriated bikers because skaters wound up taking too much of the lateral space in bicycle lanes as they moved from side to side.

Although scooters have been around since my childhood, the Razor scooter came in around 1999. (BTW, I’ve seen a few motorized versions of this as well.) Around the same time, the first Segways started coming out. And we mustn’t forget the infamous hoverboard, which is under fire for safety reasons.

I hesitate to think of what’s next. Unfortunately, the devotees of all these modes of transportation act as if they were the only game in town. Their devotees like to get into “the zone” as they speed up past all obstacles, such as stop signs, traffic signals, and unwary pedestrians.

Perhaps it’s like the United States as a whole, which is rapidly fragmenting into ever smaller subsets of wheeled transportation. In future, will there be separate lanes for pogo sticks? Will toddlers’ strollers be motorized and driven by their occupants? Will little red wagons ever come back?