It is over a thousand years ago. Caravans with goods from Europe and the Middle East are about to enter China, right near where the Great Wall sputters to an end near Mogao and Dunhuang. There, at an oasis wedged between the sand dunes of the Lop Desert and the Qilian Mountains, is a series of caves which have been hollowed out and converted into Buddhist temples.

Although Buddhism was the predominant religion of the time, works have been found among Dunhuang’s treasures that included scrolls about Christianity and Judaism, not to mention the oldest printed work on the planet, a scroll of the Buddhist Diamond Sutra.

Notice the western edge of the Great Wall in the map below. 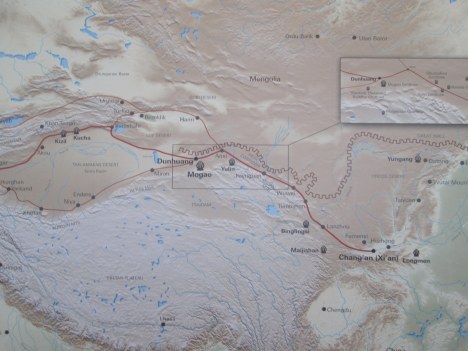 Dunhuang Is Located North of Tibet in Chinese Turkestan

The Getty Center in Los Angeles is running a major exhibit of items from Dunhuang and replicas of the most impressive Buddhist temple caves, including 3-D images. Today, when we visited, the Dunhuang exhibit halls were thronged primarily with Chinese tourists. Still, it was the most interesting of the traveling exhibits now at the Getty Center. Fortunately, the caves at Dunhuang have not been vandalized by jihadist thugs such as were the giant Buddhist sculptures at Bamiyan in Afghanistan.

We tend not to think much about the Silk Road, because it was so thoroughly shut down by Western European naval exploration and the new markets that were created by it. But as long ago as the Roman Empire, silk and spices and other goods from the East were being traded to Europe via camels on the Silk Road that extended from China to the Middle East.