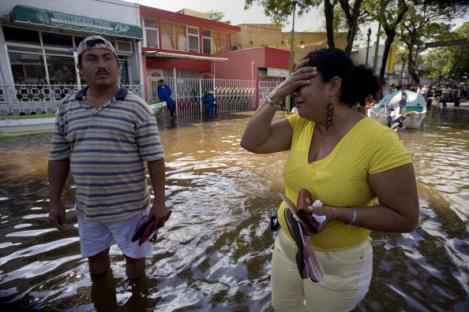 Flooding in the Streets of Villahermosa

To begin with, you can forget the vinegary hot sauce from McIlhenny Company. I’m talking about the State of Tabasco in Southeastern Mexico. I have had four encounters with this state, two by visiting its inappropriately named capital of Villahermosa in 1979 and sometime in the 1980s, and two from literature.

Tabasco first entered my thoughts when reading Graham Greene’s The Power and the Glory back in High School, and subsequently reading the same author’s book about his travels there in The Lawless Roads. From around 1920 to 1935, Tomás Garrido Canabal was virtual dictator of the State of Tabasco. A devout anti-Catholic, he persecuted the church and executed many priests and religious. So Greene went there and investigated for himself, writing his two books. (The Power and the Glory was later made into a film called The Fugitive, directed by John Ford and starring Henry Fonda.)

My first visit to Tabasco was in 1979 with my brother. We planned to overnight in Villahermosa before visiting the Mayan reuins at Palenque in nearby Chiapas. We were stunned to find that Pemex, the Mexican petroleum monopoly, was block-booking all the hotels for its employees and suppliers, leaving us nothing but the down-at-heels Casa de Hospedaje Mary (which my brother christened the “Casa de Hopes-You-Die Mary”), where we were awakened every 15 minutes from our damp and fitful sleep by roosters crowing on the roof and church bells tolling the quarter hour. That was after a dreadful meal of shrimp coated with tar and two hours spent looking for a bus terminal that wasn’t where the guidebook said it was. 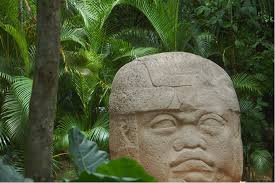 The second visit was by myself several years later. I visited the giant Olmec heads at the Parque-Museo de la Venta, taking advantage of a long plane delay flying between Mérida, Yucatán, and Tuxtla Gutiérrez, Chiapas. I was smart enough not to try to spend the night in Villahermosa, which struck me as a jungle shit-pit which was at the confluence of Mexico’s two largest (and oft-flooded rivers), the Grijalva and the Usumacinta.

Finally, I just finished reading a novel called Leaving Tabasco by the talented Carmen Boullosa. Here was an authentic voice from rural Tabasco who uses magical realism to signal her disillusionment with her character Delmira Ulloa’s childhood in the village of Agustini.

Safely ensconced in Europe, Delmira muses about her origins:

For three decades I didn’t sleep in a hammock, I saw no strange objects floating in water. No albino crocodile popped into my room, no army of Indians came by sucking voluptuously on juicy insects, no legion of toads exploded against my balcony, there were no imposing witches hawking fake merchandise, no rainstorms purchased for cash. I’ve spent six times five years here without hearing once the nightly tale of my grandmother. I came here in search of a world that obeyed the laws of physics; it is now all around me, but I can’t say I’ve come to terms with it.

Leaving Tabasco ends with a lot of questions, but no answers. That’s all right with me, because I don’t believe too much in answers—and I have a lot of questions of my own. One thing for sure: After reading Boullosa, I want to read more by her … and maybe … just maybe … I’d like to give Tabasco another chance.