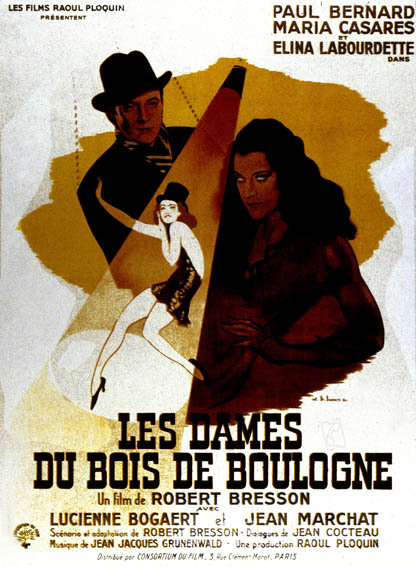 I’ve come down with my second cold of the winter season, so I decided to stay home and watch some DVDs. The last of them I purchased at Cinecon, not even knowing whether it had English subtitles. Fortunately, I did not have to watch it with Korean titles.

For over half a century, I have loved the films of Robert Bresson, beginning with Diary of a Country Priest (1951), in which a sickly young parish priest tries to minister to an uncaring, even malicious congregation. Over the years, I have seen most of his films—all of which I deemed to be masterpieces or better. Pickpocket (1959) I would easily put on a list of the best ten films ever made.

Les Dames du Bois de Boulogne came out in the year of my birth. It is a very French film based on a very French source, Denis Diderot’s Jacques le Fataliste, an 18th century picaresque novel. Bresson takes one of the stories in the novel and sets it in present day Paris.

Think of it as a tale of revenge. Hélène (played by a gorgeous Maria Casarès) breaks up with her boyfriend Jean (Paul Bernard). While they both pretend to be very civilized about the relationship, there are those two telltale tears below Hélène’s eyes that tell a different story. By accident, Hélène and Jean meat up with a beautiful young dancer, Agnès (Elina Labourdette) and her mother. Jean falls hard for Agnès, which gives Hélène her chance. She sets up the dancer and her mother in an apartment and stage manages Jean’s increasing infatuation. What Jean does not know is that Agnès was also something of a prostitute, though she seems intent on leaving the profession. Jean and Agnès marry, and Hélène casually tells Jean at the reception that most of the men at the wedding have enjoyed the favors of the bride. 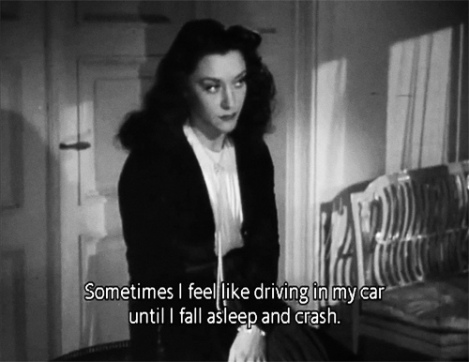 I had seen the film many years ago and didn’t like it. This is a relatively rare case of me going from zero to sixty in half a century. (It could be that the print I saw was a bad 16mm print: I think it was.) Now I love the film so much that I will also undertake soon to readt he Diderot novel on which it is based. I was supposed to have read it in French at Dartmouth for a class in 18th century French literature, but I punted it.

By the way, don’t ever skip a chance to see one of Bresson’s films.