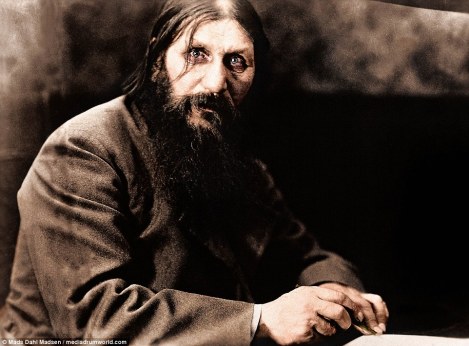 When I read Teffi’s essay on Rasputin in Tolstoy, Rasputin, Others, and Me: The Best of Teffi, couldn’t help comparing the dread Siberian starets to an American political figure in the news. Here are three instances, from which you can draw your own conclusions:

The “Black Automobile” remains a mystery to this day. Several nights running this car had roared across the vField of Mars, sped over the Palace Bridge, and disappeared into the unknown. Shots had been fired from inside the car. Passers-by had been wounded.

“It’s Rasputin’s doing,” people were saying, “Who else?”

Teffi was seated next to Rasputin, who tried to get her to have some wine:

Rasputin was drinking a great deal and very quickly. Suddenly he leaned towards me and whispered, “Why aren’t you drinking, eh? God will forgive you. Drink.”

He kept trying to get her to drink and to come to his place, but she wisely refused.

He “Sows Discord and Panic”

He profits from everything black, evil and incomprehensible. Everything that sows discord and panic. And there’s nothing he can’t explain to his own advantage when he needs to.

Now I could add that he tweets nasty, ad hominem attacks in the middle of the night, but that would be giving it away, wouldn’t it?