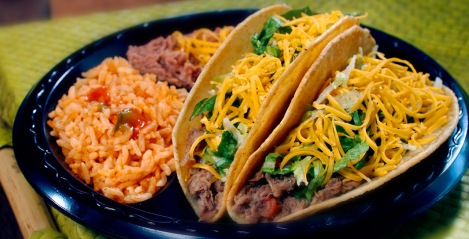 The food pictured above is an almost archetypal Mexican meal. Except that you might have some difficulty ordering the same dishes in Mexico. First of all, tacos are almost never served in a crispy shell. You may get the beans as shown, but you are probably just as likely to get potatoes .

Mexican restaurant menus consist primarily of foods which, south of the border, are usually referred to as antojitos, or street food as sold by street vendors or market stalls. Typically included are such items as tacos, enchiladas, burritos (but only near the border with the U.S., else what you are ordering is a small burro), gorditas, quesadillas, tortas, chalupas, and tostadas. Common elements include corn (and very occasionally flour) tortillas, corn meal, chiles, a tomato-based sauce, meat fillings, and cheese.

But if you eat at an actual restaurant in Mexico, you are unlikely to find any concentration on antojitos, unless a large portion of their diners are Gringos. At lunchtime, you can almost order a comida corrida, or set menu, which includes soup and/or salad, a piece of meat, potatoes, and a postre, or dessert. You will almost never get tortilla chips.

Mind you, I love antojitos. For dinner tonight, a had a combo of string beef tamal and chile relleno with rice and beans, and chips and salsa. The only real Mexican touch was the pickled carrot salad. If I were in Ensenada and points south, I would prefer to find filete de pescado al mojo de ajo (filet of fish sautéed with garlic) with potatoes, perhaps with flan or queso napoletano for dessert.

So if what is keeping you from going to Mexico is a dislike for tacos or other tortilla-based foods, you need not worry. There will, of course, be differences, such as beef that is tougher and not aged as much as our way. But the general impression of the meal as a whole is nowhere like the one pictured above.