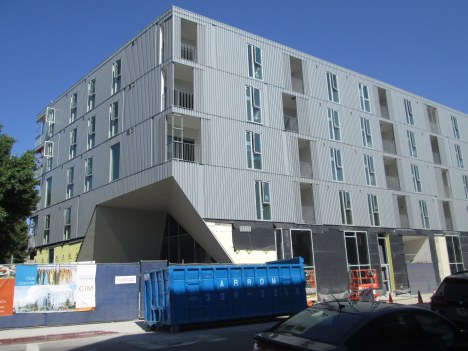 Another Monstrosity Going Up in West L.A.

I live just a couple hundred feet south of U.S. Route 66, the “Mother Road,” as it comes close to ending by the shore of the Pacific Ocean. In my neighborhood, it is called Santa Monica Boulevard, which joins with Sunset Boulevard in East Hollywood and runs some ten miles from there to the Ocean. There is a mile-long stretch of Route 66 near me in which the old low-lying buildings are being replaced by high-rise apartment buildings mostly intended for filthy rich tenants.

There may be a few apartments in each building reserved for low-income tenants, but knowing the power of unscrupulous real-estate developers, most are not. And many of the units will be empty for years to come, especially as the coronavirus depression takes hold.

Martine and I cynically note the endless FOR LEASE signs on newish buildings. At the same time, there is a real shortage of housing for non-millionaires throughout the metropolitan area. Every month, it seems there are more tents with raggedy bums, more weather-beaten RVs, and more genuine homeless who have been turned out of their housing by greedy, unscrupulous landlords. The units in the building shown above will, no doubt, house only the well-to-do.

At the same time that multi-tenant units are springing up all over West L.A. (and other parts of the city), little attempt is being made to face the traffic problems that will inevitably ensue. Mayor Gil Garcetti thinks everyone will take the bus or rise the MetroRail trains; but I think that most of the people who can afford the new units would be afraid to take public transportation, as it brings them face to face with homeless turnstile-jumpers, and—oh horrors!—black people.

There will be a reckoning in the years to come—one that will topple the political ambitions of Garcetti and his associates who are altogether too cozy with the developers. And the developers? They will have moved on to cause problems elsewhere, as they always do.