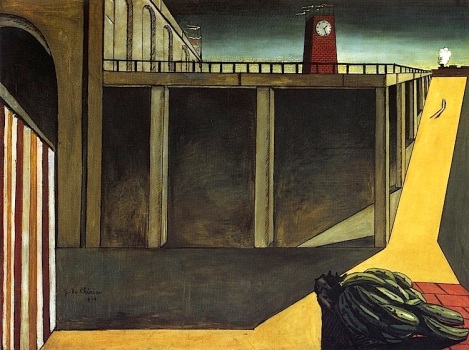 It was in a survey of impressions of the global coronavirus outbreak tin the April 23, 2020 issue of the New York Review of Books hat I saw this remark by Northern Irish Poet Nick Laird:

The prophecies arrive: hundreds of thousands of dead, trillions of dollars spent, millions and millions losing their jobs, their health care, their homes. Soldiers on the streets. Each graph, each blank statistic. Each talking head. Stick a fork in the ass of civilization, it’s done. Don’t be silly, this is a blip. I don’t think so. In the stream of news the poems sit like stones, lambent under the surface. Auden’s “Gare du Midi,” where the man with his little case alights from the train, and steps out “briskly to infect a city/Whose terrible future may have just arrived.”

And here’s the poem to which Laird refers:

A nondescript express in from the South,
Crowds round the ticket barrier, a face
To welcome which the mayor has not contrived
Bugles or braid: something about the mouth
Distracts the stray look with alarm and pity.
Snow is falling, Clutching a little case,
He walks out briskly to infect a city
Whose terrible future may have just arrived. 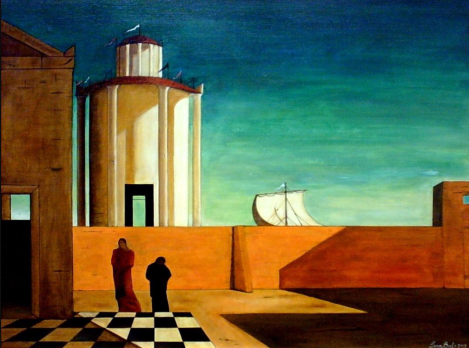 His Surrealist Landscapes Are Endlessly Fascinating

The scene is a port somewhere. You can see the unfurled sails of a ship just over the wall while two muffled figures hover around the entrance of a building. There is a tower just over the wall that could be a lighthouse, but maybe not. Note the conflicting shadows: The building on the left is casting its shadow in the 4 o’clock position, while the unseen structures on the right have shadows that are closer to the 10 o’clock position, I love these strange Mediterranean landscapes which seem to suggest so much but say nothing clearly.

Giorgio di Chirico (1888-1978) was, to my mind, the greatest of the surrealist painters. Although I prefer the landscapes, he painted other subjects as well: 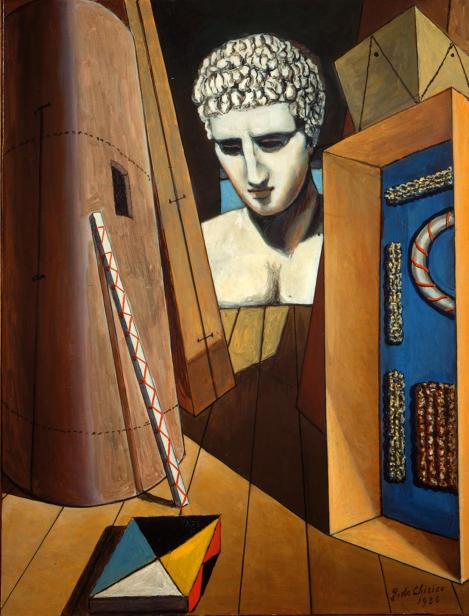 In one of his writings, the painter states, “What is especially needed is great sensitivity: to look upon everything in the world as enigma….To live in the world as in an immense museum of strange things.” The above image certainly qualifies. 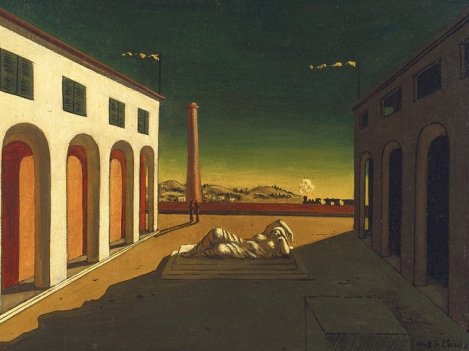 The flags atop the facing buildings show a strong wind blowing from right to left. The steam from the locomotive beyond the wall in the background, on the other hand, is going straight up. Again, we have two muffled figures in the middle distance and a strange statue of a reclining male in the middle of the square. Again—not unusual with Chirico—the shadows are a little inconsistent. Where, for instance, is the shadow of the tall phallic tower. 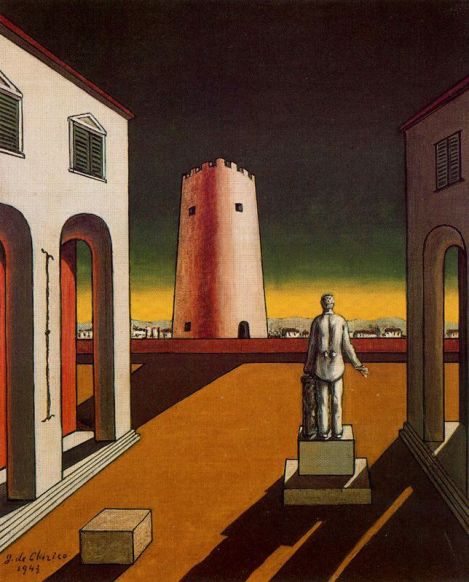 I have been reading Italo Calvino’s masterful Invisible Cities, inspired in equal part by Marco Polo’s Travels and the paintings of Giorgio di Chirico. In turn, it inspired Geoff Dyer’s The Search.

Picture to yourself Marco Polo describing to Kublai Khan the cities he has passed through to reach the Celestial Kingdom. Each city is more fanciful than the next. Here, for instance, is Ersilia:

In Ersilia, to establish the relationships that sustain the city’s life, the inhabitants stretch strings from the corners of the houses, white or black or gray or black-and-white according to whether they mark a relationship of blood, of trade,  authority, agency. When the strings become so numerous that you can no longer pass among them, the inhabitants leave: the houses are dismantled; only the strings and their supports remain.

From a mountainside, camping with their household goods, Ersilia’s refugees look at the labyrinth of taut strings and poles that rise in the plain. That is the city of Ersilia still, and they are nothing.

They rebuild Ersilia elsewhere. They weave a similar pattern of strings which they would like to be more complex and at the same time more regular than the other. Then they abandon it and take themselves and their houses still farther away.

Thus, when traveling in the territory of Ersilia, you come upon the ruins of abandoned cities, without the walls which do not last, without the bones of the dead which the wind rolls away: spiderwebs of intricate relationships seeking a form. 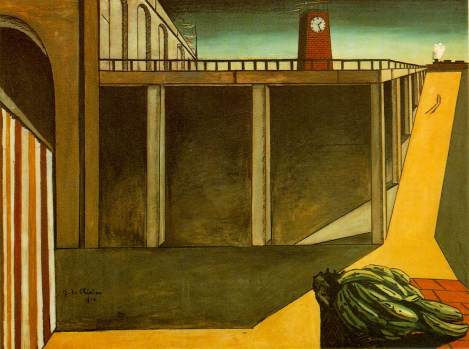 I usually do not write about a book until I have finished reading it, but I decided that I had to post this while the ideas were still fresh in my mind. Geoff Dyer’s novel The Search (1993) started out as a genre mystery/detection novel, but has transformed into a Giorgio di Chirico painting.

We are in a non-specific country in an area known as The Bay. A man named Walker (no first name given) winds up at a party with his brother and meets an alluring woman known as Rachel Malory and asks him to track down er ex-husband in order to get some papers signed. Walker finds Rachel seductive, but she does not allow herself to be seduced, which only spurs Walker on. Although he does it ostensibly for money, it is really she who is the goal of his endeavors.

So far, so good. But it is not long before strange things begin to happen. First of all, he meets a man named Carver who wants badly to compare notes with him about Malory. When he refuses, Carver threatens to kill him. So while he is chasing Mallory, he is being chased by Carver. Then even stranger things begin to happen:

There was something strange about the city but he was unable to work out what. Then it came to him. There were no trees or pigeons or gardens. Yet all around were the sounds of leaves rustling and the beating of wings, the cooing of departed birds. He was so shocked that he stood at a street corner, listening.

Then there was a closed bridge that was actually vibrating like a plate of Jello in the wind. Walker goes through a series of tatty cities in this strange nondescript landscape. In one, there are no people; and he is able to get a suit and a car without paying for them. In another, there doesn’t seem to be much of a city, but whatever there is is surrounded by a network of wide freeways on which all the motorists are speeding furiously.

There don’t seem to be any clues about Malory, but Carver or some unknown assailant is still chasing him through a series of random cities. 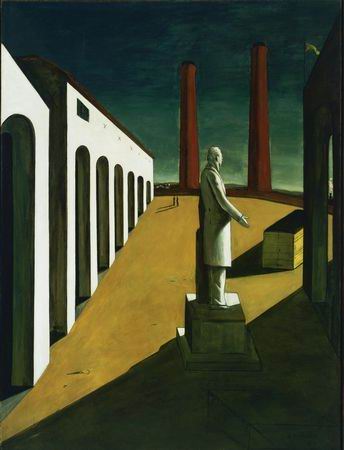 “Enigma of a Day”

That’s when I thought of di Chirico, that painter of mysteriously nonspecific cities. Cities like Meridian, Port Ascension, Eagle City, Usfret, Kingston, Monroe, Durban, Iberia, Friendship—the list stretches on. Each town is different from the other, in a sort of alternate United States with black and Latino ghettos. In one unnamed city, he even finds what looks to be a picture of Malory with Rachel.

As the surrealism grows, I almost want to ration the rest of the book so that I don’t finish it too soon.