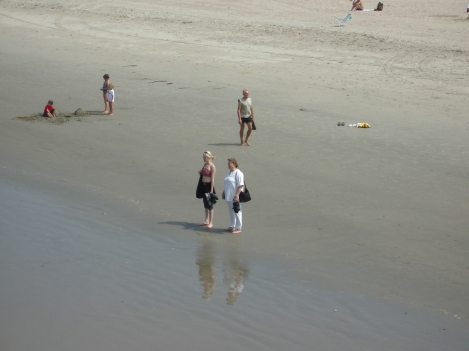 I was so very impressed by Czeslaw Milosz’s book Milosz’s ABC’s. There, in the form of a brief and alphabetically-ordered personal encyclopedia, was the story of the life of a Nobel Prize winning poet, of the people, places, and things that meant the most to him. Because his origins were so far away (Lithuania and Poland) and so long ago (1920s and 1930s), there were relatively few entries that resonated personally with me. Except it was sad to see so many fascinating people who, unknown today, died during the war under unknown circumstances.

My own ABCs consist of places I have loved (Iceland), things I feared (Earthquakes), writers I have admired (Chesterton, Balzac, and Borges); things associated with my past life (Cleveland and Dartmouth College), people who have influenced me (John F. Kennedy), and things I love to do (Automobiles and Books). This blog entry is my own humble attempt to imitate a writer whom I have read on and off for thirty years without having sated my curiosity. Consequently, over the months to come, you will see a number of postings under the heading “Tarnmoor’s ABCs” that will attempt to do for my life what Milosz accomplished for his. To see my other entries under this category, hit the tag below marked “ABCs”. I don’t guarantee that I will use up all 26 letters of the alphabet, but I’ll do my best. Today, we’re at the letter “L,” for Los Angeles, where I have lived for almost half a century..

Los Angeles is a difficult place to get to know. It took me at least five years before I even had a grudging acceptance of the city. Now I feel that I love it, for all its strange ways. I do not love the earthquakes, the hot weather, the gigantic brush fires that fill my lungs with ash, the self-entitled young professionals in their expensive sports cars, the decaying infrastructure, the Santa Ana Winds that make the skin peel off around my fingernails, or the long distances involved in going just about anywhere. And yet, there is a quality of the light that suffuses this place, especially early and late in the day. I also like the blend of cultures, mostly Latino and Asian, that make this a cosmopolitan metropolis.

This is a city that has its own literature. Here, for instance, is Raymond Chandler in his story “Red Wind”:

There was a desert wind blowing that night. It was one of those hot dry Santa Anas that come down through the mountain passes and curl your hair and make your nerves jump and your skin itch. On nights like that every booze party ends in a fight. Meek little wives feel the edge of the carving knife and study their husbands’ necks. Anything can happen. You can even get a full glass of beer at a cocktail lounge.

Mostly because of the outside influence of Hollywood in its glory days, many great writers passes this way and left their mark: Aldous Huxley, Bertolt Brecht, Thomas Mann, William Faulkner, Scott Fitzgerald, Nathanael West, John Fante, Evelyn Waugh, Ray Bradbury, and Joan Didion—just to name a few. If you like that sort of thing (I do not), there has also been a lot of modern art and architecture produced.

You may have heard that California is in a historic drought and has received precious little rain for the last three years. When I go to Lima, Peru, later this summer, I will be in another Pacific coast city where it almost never rains. I suspect it will remind me of L.A., except for the very different cultural context.

Would I ever move from Los Angeles? Possibly. Around the time I retire, I will no doubt come to the realization that I can no longer afford to live here. When that happens, it will be a difficult time for me. But then, nothing is forever.