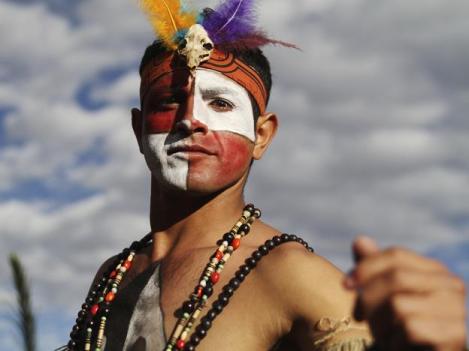 Before Francisco Pizarro upset the whole apple cart, Inti Raymi was one of four major Inca festivals celebrated in Cusco. It is still celebrated annually, except the venue has moved to the nearby ruins of Sacsayhuamán—usually pronounced by American tourists as “Sexy Woman.” The following description of the festival’s origin is from Wikipedia:

According to chronicler Garcilaso de la Vega, Sapa Inca Pachacuti created the Inti Raymi to celebrate the new year in the Andes of the Southern Hemisphere. The ceremony was also said to indicate the mythical origin of the Incas. It lasted for nine days and was filled with colorful dances and processions, as well as animal sacrifices to thank Pachamama and to ensure a good cropping season. The last Inti Raymi with the Inca Emperor’s presence was carried out in 1535, after which the Spanish and the Catholic priests banned it.