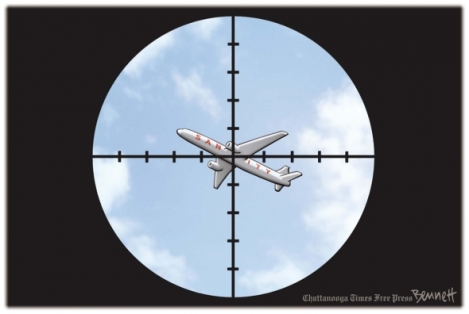 Not One of Our Great Moments in Military History

The date was July 3, 1988. The United States Navy was engaged in the Persian Gulf protecting oil shipping lanes. Around that time, there had been several hostile engagements with both the Iraqi and Iranian forces. Shipping through the Straits of Hormuz had to cross into territory claimed as Iranian waters in order to avoid running aground.

The USS Vincennes, a guided missile cruiser patrolling the Straits, picked up a signal from an aircraft that it misidentified as coming from an F-14 Tomcat, of which there were several in Iran’s air force. It let fly an SM-2MR surface-to-air missile. Instead of an F-14 Tomcat, the missile brought down an Airbus 300B2-200 flying a commercial flight as Iran Air 655 between Bandar Abbas, Iran and Dubai. On board were 290 persons, including 66 children and 16 crew. All persons on board died.

Did the United States apologize to Iran? According to Wikipedia:

In 1996, the United States and Iran reached “an agreement in full and final settlement of all disputes, differences, claims, counterclaims” relating to the incident at the International Court of Justice. As part of the settlement, the United States did not admit legal liability but agreed to pay US $61.8 million ($92.9 million today), amounting to $213,103.45 ($320,446 today) per passenger, in compensation to the families of the Iranian victims.

Although flight numbers are usually retired after a prominent airline disaster, Iran Air still has a flight 655. I guess they want to keep the villainy of the Great Satan fresh in their minds.

As to the Malaysian Airliner Flight MH17 shot down over Eastern Ukraine, I highly recommend that you read Patrick Smith’s posting on the subject in his Ask the Pilot blog in preference to listening to the mainstream media pundits bloviating about unsupportable conspiracy theories.