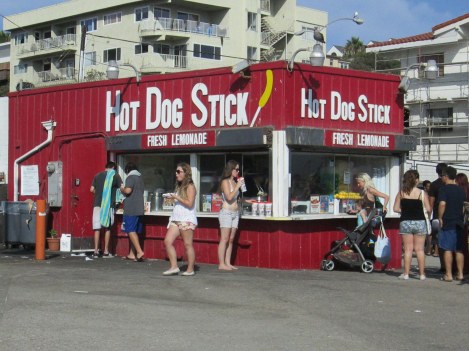 The Original on the Boardwalk in Santa Monica

We got together with our friends Bill and Kathy Korn today and did something a little bit different. Bill had been visiting restaurants featured on the late Huell Howser’s television programs and decided he wanted to try the Original Hot Dog on a Stick restaurant on the Santa Monica Boardwalk, just a few steps from the Santa Monica Pier. The above picture shows the restaurant, which somehow never had the connective words “on a” painted on its sign that is now part of the company name. So it was to the original stand dating back to 1946 to which we repaired to dine on a delicious hot dog stick.

Martine was not particularly enthralled with having to sit on a wall that was liberally decorated with dried bird droppings, and even less having to maneuver through the massive crowds on the pier; but she put up with it. Bill and Kathy are from a part of Los Angeles where going outdoors in July is, to say the very least, uncomfortable. Just to get an idea of the crowds, see the picture below:

Crowds on the Beach North of the Santa Monica Pier

Curiously, we had some rain this afternoon. Not only did we have rain, but also a rare lightning strike that killed one twenty-year-old male and injured several other people. By the time we went, about an hour and a half later, the storm, such as it was, had moved eastward.

Speaking of Hot Dog on a Stick, I remember visiting the Pier one Sunday morning in 2009 and wandering into the middle of several hundred young men and (mostly) women dressed in the standard uniform for a corporate meeting: