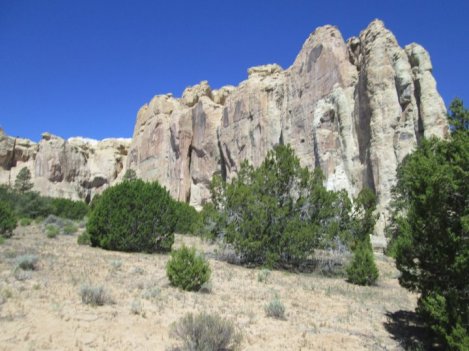 One place I have visited several times in my travels through New Mexico is El Morro National Monument, known for bearing “graffiti” from the Anasazi, the Spanish Conquistadores with Oñate and Coronado, and American scouting parties of the 1850s. There they all are, along the east bluff of the butte. And if that’s not enough, you could climb to the top (only a couple hundred feet) to see the ruins of Atsinna, the ruins of a well defended Anasazi pueblo with long views in every direction.

The day we went, there was an interesting ranger presentation on the United States Camel Corps, which came into existence at the behest of Secretary of War Jefferson Davis in 1853. Many of the names signed on the wall of El Morro was from members of this short-lived army unit. Eventually, the idea was abandoned; and many of the camels were sold into zoos, and some even ended up at Fort Tejon on the Grapevine between Los Angeles and Bakersfield.

El Morro is just one of the many attractions along New Mexico Highway 53, which runs through the Zuñi Reservation, near Ramah’s Wild Spirit Wolf Sanctuary, El Morro, and El Malpais National Monument ending up at Grants and I-40. If you are traveling between Gallup and Grants, it is far better to go out of your way and spend some time along this fascinating route.