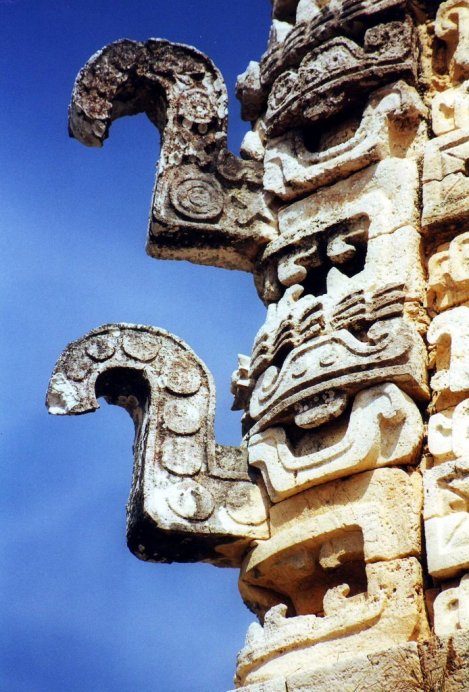 From my trips to Yucatán, I became impressed with the one dominant image of Yucatec Mayan art: The face of Chac (pronounced CHOCK), the rain god. You see, Yucatán is a land without surface rivers. Oh, there is plenty of flowing water underground, but none of it breaks the pitted limestone surface of the peninsula. In areas several hundred feet above sea level, such as in the Puuc Hills, the water that sustained the ancient Mayans came from chultunes, underground cisterns. In some years, the cisterns were full; in others, there was pitifully little to sustain the cornstalks that fed the people.

When one visits Yucatán, particularly in Puuc Hill sites such as Uxmal, Kabah, Labna, Sayil, and Xlapak, the dominant image is that of hundreds of Chac masks acting as façades of the Chenes-style buildings.

After the rainy winter Southern California had last year, I was hoping for a repeat, but so far this rainy season, we haven’t received anywhere near an inch, or even a centimeter, of the wet stuff. We have rain forecast for next week, but my fingers are crossed. So often the winds just blow the clouds inland where they go to water the desert.

I am thinking, perhaps, of going to Yucatán again this year. There are a number of Mayan sites I have yet to visit, such as Coba in the State of Quintana Roo and Edzna and Xpujil in the State of Campeche. Despite the heat and humidity of the great limestone block that is the peninsula, it is a fascinating tourist destination, well developed with reasonable accommodations and good food. In addition to Yucatec cuisine, which is quite distinctive with its reliance on achiote, bitter oranges, and Habanero chiles, there are Syrian restaurants (the merchant class of 150 years ago was heavily Middle Eastern), plus the standard Mexican antojitos.

If I go, it will be toward the end of the year, after the rainy season which is also super hot and sticky.