It was almost always thus. In most years, Cleveland teams piled up a dismal win/loss record. Not that I give a fig for professional sports, but while I was living there, I would have given much for a winning season. In 1959 the Indians won the American League baseball pennant (but lost the series ignominiously to the White Sox). And in 1964, the Cleveland Browns shut out Johnny Unitas and the Baltimore Colts 27-0. That was when Frank Ryan was quarterback and Jim Brown was at fullback and gary Collins and Paul Warfield were the ace receivers. After that, it was not until 2016 when a Cleveland team, the Cavaliers, won the NBA championship.

I actually had a personal stake in the Cleveland Indians doing well. As a straight-A student, I received seven pairs of free Indians tickets every summer—mostly to see them go down to defeat. Acutely, I felt that Seymour Krebs’s “The Monster That Devoured Cleveland” from The Many Loves of Dobie Gillis had struck. I was in a major dudgeon until I could leave “The Mistake on the Lake,” which I did in 1962, when I went to college in New Hampshire. Thereafter, when I came home from Dartmouth, I could watch my father stew in his juices as his teams traduced his efforts at fandom. 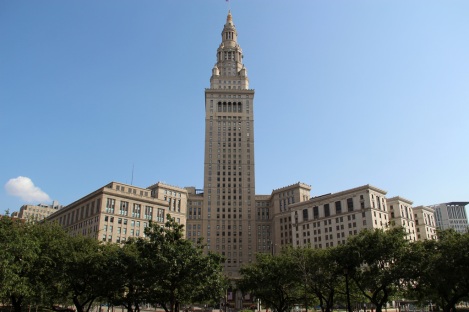 Sometimes I think my great love of travel comes from feeling stuck in Cleveland and wanting to get out at any cost. It’s a pity, because at one time it was a fairly nice place. It did not, however, fare well economically and demographically. When I was in the lower grades of grammar school, it was the seventh largest city in the U.S. Now it ranks fifty-first, behind Oakland, Tulsa, and Wichita.