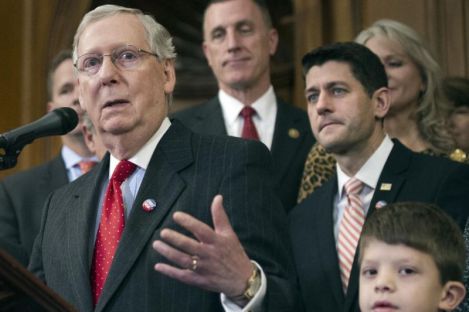 Republican Stumblebums from the Senate and House (Except for the Kid: He’s Innocent)

As the U.S. Government heads for another disastrous shutdown, one is led to wonder at the utter uselessness of the officials we have chosen to represent us in Congress. Senator Mitch McConnell (Ratf*ck—Kentucky) and Congressman Paul Ryan (Ratf*ck—Pennsylvania) should be made to swallow their U.S. Flag pins and commit ritual hara kiri on the steps of Congress.

I really don’t like writing about American politics. Heck, I don’t even like discussing politics with my friends. I feel soiled when I do.

Even though there will be an election this November, I have diminishing faith in the American voters who selected the present clowns in office. They will either be re-elected or replaced with other clowns who are attracted to the ways of power. When that power serves only to disgust not only the American people, but our allies (if any are left), and embolden our enemies (the list is growing).