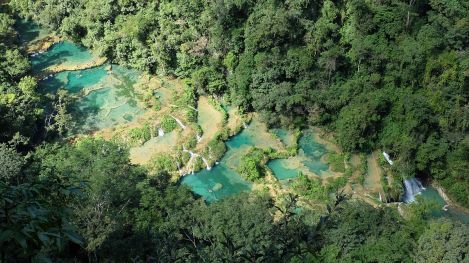 A Land Bridge With Pools Under Which the River Flows

My niece Hilary has been to Guatemala a few years back. When I talked to her a couple of weeks ago, I asked which place impressed her the most. Her answer sent me to the index of my guidebook. It was Semuc Champey in the department of Alta Verapaz. This is what I found in my Moon Guatemala guide from 2015:

A giant, 300-meter-long limestone bridge forms the backbone for the descending series of pools and small waterfalls that makes up Semuc Champey. The water that fills the pools is the product of runoff from the Río Cahabón, churning as it plunges into an underground chasm from where it reemerges downstream at the end of this massive limestone overpass.

One can swim in these pools—it does look refreshing considering the surrounding jungle. There are also trails to a lookout point (from which the above photo was probably taken) and down to another point where the river plunges into an underground cavern. Sounds like Coleridge’s Xanadu:

In Xanadu did Kubla Khan
A stately pleasure-dome decree:
Where Alph, the sacred river, ran
Through caverns measureless to man
Down to a sunless sea.

The only problem is that Semuc Champey is not really on the road to anywhere. My first reaction to that, though, is “sounds like fun.” I may just decide to take my swimsuit and try a dip in the waters.