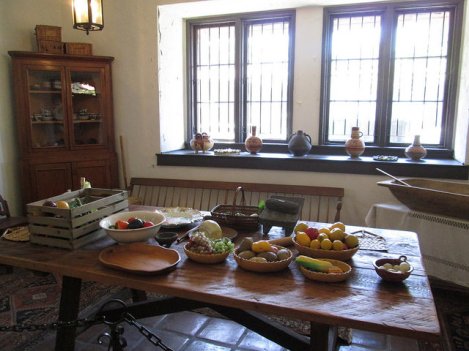 The Dining Room of the Rancho Dominguez Adobe

Now take a detailed map of Los Angeles, and you will see these same names replicated as names of streets, communities, hills, and waterways. The road that winds around the UCLA campus is called Buenos Ayres. There are Verduga Hills in the valley, around which snake an endless number of streets with Verdugo in their names. If I were to take a bus downtown, I would go on or past streets names Santa Monica, Centinela, La Cienega, San Vicente, and La Brea—all within ten miles. 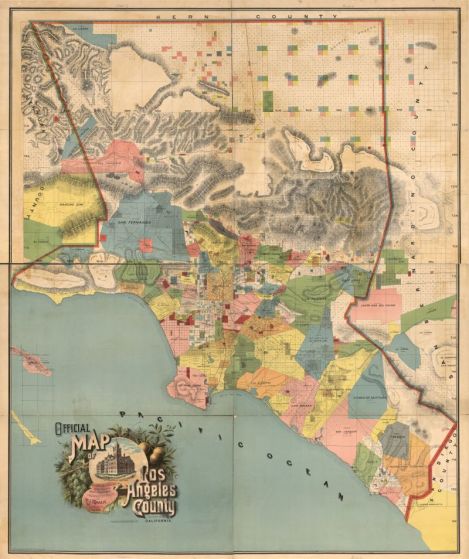 A Map of Spanish Land Grants in Los Angeles County

Scattered throughout the county are the various adobes, or what remains of the grantees’ ranchos and haciendas. I have visited the Centinela and Dominguez adobes, and there are others I’d like to see. They are usually staffed by enthusiastic volunteers and stocked with furniture of the period. The oldest house in the City of Los Angeles is the Avila Adobe, which belonged to an early alcalde and is part of the Olvera Street tourist complex.

By the way, let’s call the city by its founding name: El Pueblo de Nuestra Señora la Reina de los Angeles de Porciúncula. That translates to the town of our Lady Queen of the Angeles of Porciúncula. (Curiously, one place name that’s widely missing in L.A. is Porciûncula—too long, I guess.)