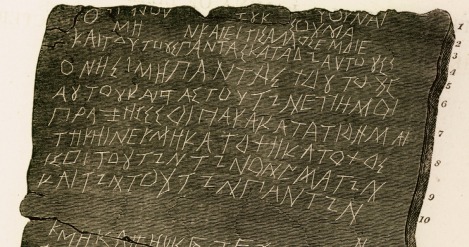 The Ancients Had Some Interesting Practices

According to a Dutch scholar named H. S. Versnel, the ancient Greeks had a practice involving the creation of “curse tablets.” In Memphis in the fourth century BC, the following curse was left etched into a tablet at the Temple of Oserapis:

O Lord Oserapis and you gods who sit enthroned together with Oserapis, to you I direct a prayer, I, Artemisia … against the father of my daughter, who robbed her of her death gifts (?) and of her coffin … Exactly in the way that he did injustice to me and my children, in that way Oserapis and the gods should bring it about that he be not buried by his children and that he himself not be able to bury his parents. As long as my accusation against him lies here, may he perish miserably, on land or sea….

Now these curse tablets were typically made of lead with the curse scratched onto their surface. Although I cannot wish death to the man I most ardently hate (whose visage is caricatured below) there are certain things I can say without bringing the Secret Service to my doorstep.

The Object of My Own Curse Tablet

May his bucket of chicken contain gristle that rots his fundament. May his fingers that would fly over his cellphone in a Twitter fury come out as utterly incomprehensible covfefe—at all times. May his followers discard their red MAGA hats out of shame, and may he be buried with a large streamer of toilet paper adhering to his shoes. May his real estate investments come to naught and his billions all turn out to have been illusory. May he be laughingly turned down by women he does not regard as beautiful and forget what his original urge was all about.