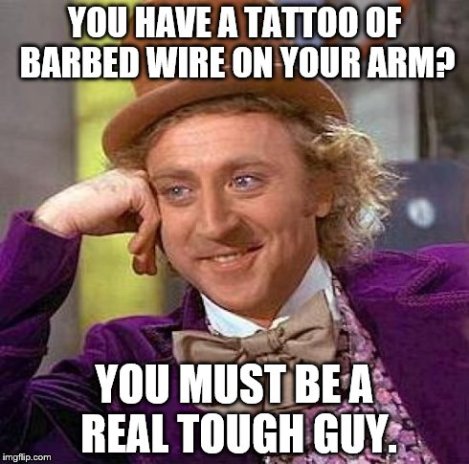 What ever happened to the American male? At some point, did everyone get together and decide that they’d be happier if they looked like Roman gladiators? What with all the tattoos and several days’ beard growths, guys are looking as if they can take care of themselves. Even if, really, they are marshmallows.

Even fat guys are wearing those shorts that go down to the ankles so that they resemble gang veteranos. Even if they never belonged to a gang.

What I want to know is this: Is anyone being fooled, really? What do we gain from looking like tough guys, even when we aren’t? Perhaps it’s because of the movies. I just saw the last half of a movie called In a Valley of Violence (2016) starring Ethan Hawke and John Travolta. All the male actors are as scruffy as makeup can make them, even the ones who are actually cowardly. The two women in the film—Taissa Farmiga and Karen Gillan—who play sisters, are actually tougher than their men, and without being scruffy.

I would hate to think that the American Male is a victim of Central Casting.